Operation is the production line in the IT factory. This is where the entire responsibility for the IT environment is located, with servers, network, applications and systems which create value for the business at all times. Nearly all businesses are directly dependent on their IT services for their business operations to function. If they do not deliver, then it is often associated with major costs and loss of production.

Despite this, Operation is often given less priority when it comes to new investments and projects. A new system is easier to link to benefits in the business, while Operation is regarded as a grey expense. The driving force for operational investments is often that technological developments forces IT organizations to replace parts of the IT environment. In the worst case this leads to that the business’s management team is not able to ascertain from where the costs derive, with the result that they become a general increment that is distributed throughout all parts of the business. This contributes to an increased perception that IT operations are a pure cost with no directly visible benefit for the business.

Success for Operation relies on Relations and Delivery Control functioning. Documented agreements for the delivery of IT services which can be clearly linked via the service structure to supporting services and products facilitate the work of tracing operational costs to a specific section of the business.

If the IT organization succeeds in establishing this connection, future operational investments can be more simply measured against the benefit to the business. Furthermore, conditions are created to anticipate increased operating costs for planned changes in the business or the IT system. Operation thus becomes a part of the value supplied to the business via IT services instead of being an unspecified expense which is distributed throughout the business as a standard cost.

Operation comprises all activities required for the IT environment to function, and for the agreed levels for the delivery of IT services to the business to be achieved.

Operation is the hub for the majority of all ticket management within the IT organization. The bulk of the flow consists of issues from the business’s users which are managed by the Service Desk function.

Service Desk primarily uses two processes: Incident Management to manage Incidents in the IT environment and Request Fulfilment for orders and questions from users. The issues that Service Desk cannot manage are passed on to the coordination process and the Technical Management and Application Management functions. These functions are also responsible for resolving problems in the Problem Management process, ongoing maintenance in the Operational Maintenance process and changes implemented in Transition. 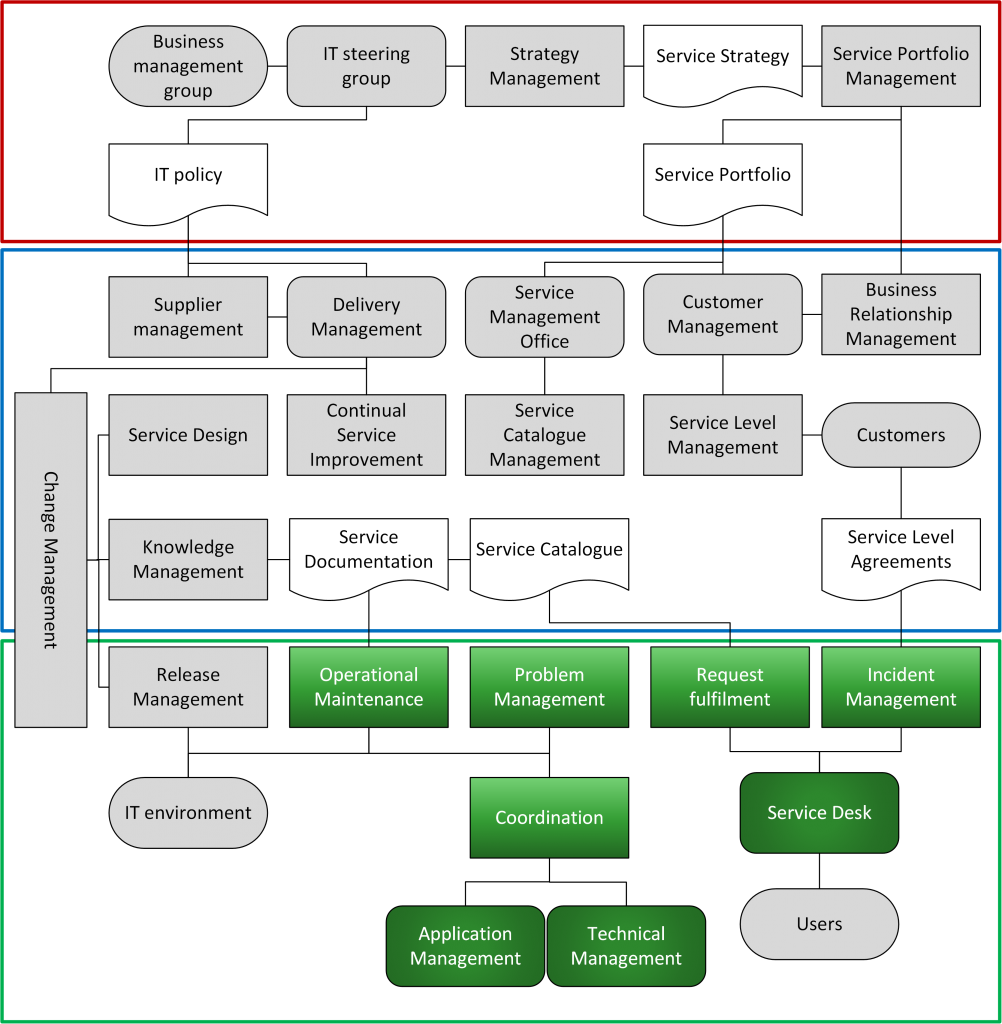 Input to the phase:

Output from the phase:

Responsibility for procedures in Operation

A well-functioning Operation can be compared with an efficient factory where, regardless of what happens, everybody knows what to do. Everything that happens should be registered as an issue and all activities must be governed by a procedural description. The efficiency and quality of Operation is directly dependent on these documented procedures and there being information available about the services that are produced.

The content in the procedural descriptions and the documented information about the services are not the responsibility of any of the functions in Operation. The overall responsibility that a service is produced efficiently lies with the Delivery Management function. All procedures and documented information that is needed for Operation should come together with the deployment of the service in the Release Management process.

In other words, if there is no procedural description or information, it is not incumbent on Operation to rectify the situation. It should be registered as a proposal in the Continual Service Improvement process and be submitted to the relevant Delivery Management function.