If an organization is to be responsible for an object, regardless of whether it is a building, a train or an IT service, then detailed knowledge of the object is required as well as complete control of the object’s component parts.

The Release Management process is the IT organization’s way of obtaining knowledge about and checking the component parts in the objects for which it is responsible. The process is the organization’s chance to get to know the object, develop knowledge, document procedures and test functionality before the object goes live for delivery to the business. In the worst case, skipping this step means that the IT organization is responsible for operation and maintenance of an object about which it has insufficient knowledge.

The main purpose of the Release Management process is to establish changes in the IT environment without disturbing the existing production of IT services and also ensuring effective management of new services in connection with transition to Operation.

This takes place through all start-ups ensuring that:

The release process comprises all resources that are required to build, test, package and establish a release in the production environment, and also to ensure all parts specified in the design package before transition to IT operation. Examples of what can be included are:

Value for the business

The Release Management process supplies a value to the business through:

With, for example, application development, a plan is established within the framework of the development project which is approved and financed by the purchaser. A change record is subsequently registered in the Change Management process for the entire project plan and a release plan is drawn up for the entire project. Each sub-release in the project is subsequently managed as a separate deployment.

The release units which are built in order to be deployed together are put together in a release package. It might, for example, be a combination of hardware and software which must be changed at the same time or documentation and training as a supplement to a new application.

A release is the overall designation for that which is tested and deployed in the IT environment at the same time. A release can consist of a single release package or several different release packages which are not directly dependent on each other.

In the agreements with the business, the IT organization can indicate a number of predetermined dates on which planned changes are to be implemented. This facilitates internal planning, at the same time as it regulates the business’s level of expectation during these dates. Each release window is managed as a release and has a specific release plan for each occasion.

A release model can be created for recurrent releases of a similar type. It describes the steps through Release Management and functions as a template for a release plan. It is often beneficial for IT organizations with a large number of systems that are updated to create a release model which is used by all administration groups.

The model can also be used by suppliers with the aim of making the collaboration faster and facilitating planning. The model contains:

There are four main activities in the Release Management process: 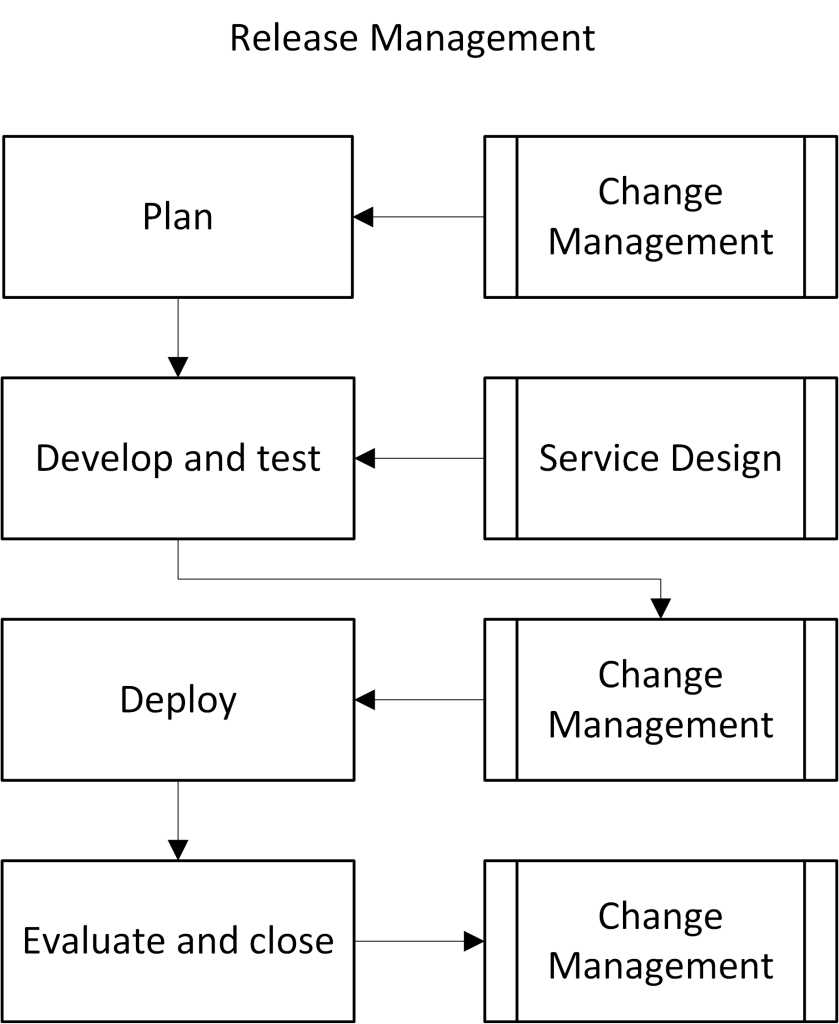 The plan should contain as a minimum:

For major releases there is usually a complete design package. Besides this, the plan should also contain:

The following is checked during the evaluation:

The following documentation should be available within the framework of Release Management:

Relationships with other processes and functions

The Release Management process has links to many other processes. The most common are listed here:

The following inputs are needed for the process:

The following outputs are generated by the process:

This is how the Release Management process can be measured:

The following elements require specific attention when implementing the process: