Many IT organizations tend to ”do everything”. They act reactively to the business’s changes and the everyday operation largely consists of urgent measures at all levels. It thereby becomes difficult to maintain unity in the delivery. In brief, there is no clear strategy. A strategy should describe what should be done and as a consequence, also what should not be done. Only then can the resources be assembled within the organization and be effective. At the simplest level, the strategy is a plan that describes how the organization should achieve a number of set objectives, and also which steps should be taken in order to move from one position to another with respect to internal and external variables.

An IT strategy focuses on how an IT organization should support the business using IT. A major challenge in this is to define the dividing line between the IT organization and the business. Even though no money changes hands internally, the aim is a business-like relationship with customers on one side and suppliers on the other.

The extent to which IT is regarded as a service delivery differs profoundly between different organizations. There are often units within the business which also handle IT issues. Examples of such units can be local support groups, internal operation of specific systems or administration of applications. This means that one of the fundamental decisions is whether these units belong to the side that delivers IT or the side that uses IT. If it belongs to the delivering side, then these units are also a part of the IT delivery and are included in the IT strategy. If not, it means that the business has several suppliers of IT.

Other questions arise such as how the IT department should collaborate with these other units and who maintains the unity of the IT delivery to the business?

Working with strategy is rarely as simple as defining an objective and a number of activities. There are three fundamental questions that have to be answered before work on strategy can begin:

The answers to these questions creates a clear picture of the IT organization’s assignment. Without that clarity, misunderstandings sometimes arise and discussions are held that take up time and energy of both the IT organization and the business.

The assignment for an IT organization can vary greatly, depending on the size of the business, whether all or certain parts of the IT production process is outsourced and also on the internal allocation of responsibility between different units. The extent of the work on strategy follows the extent of the remit for the IT organization which will work on the strategy.

An example is the company which divides its IT responsibility into a number of operational IT units and one productive IT unit. This means that an overall IT strategy is needed for the company as a whole, as well as separate strategies for each unit. The extent of the strategy work is thus dependent on which perspective the unit has within the company, where the overall strategy becomes an internal prerequisite for the individual unit’s strategy.

Regardless of which unit will work on strategy, the work comprises four areas:

Strategic position describes how the IT organization should differentiate itself from other competing alternatives. In general, the greatest value lies with internal production of local IT knowledge and operational knowledge. In their endeavor to become efficient, many IT organizations forget this value and standardize their output on fixed, conventional services for the business, thereby losing their unique position in terms of flexibility and being close to operations. This can lead to the business questioning the internal production of IT and outsourcing becoming an alternative.

Internal IT organizations thus also need to think about and clarify their position and their authority within the company.

The most tangible part of a strategy is a number of documents which are often described as the strategic plan. This plan describes how the IT organization should achieve its strategic objectives and the extent of the resources it has to invest in this. As the future is uncertain, different scenarios can be described which are continually changing and being updated.

Plans are written at several levels and by different parts of the IT organization. All of these plans must be unified so that they work towards the same strategic objectives and it is the totality of these plans that is included in the strategic plan.

Pattern describes how the IT organization should organize itself and which working methods should be used to achieve the strategic objectives. The processes that should be used and how the collaboration with the business and suppliers should be pursued are described here. The aim is to create a uniformity of action which permeates the entire IT organization.

Strategy is focused on providing benefit to the business through use of IT, which means that the bulk of the input derives from the business’s management and the output is targeted at the Delivery Management and Customer Management functions at tactical level.

Inputs to the phase:

Outputs from the phase: 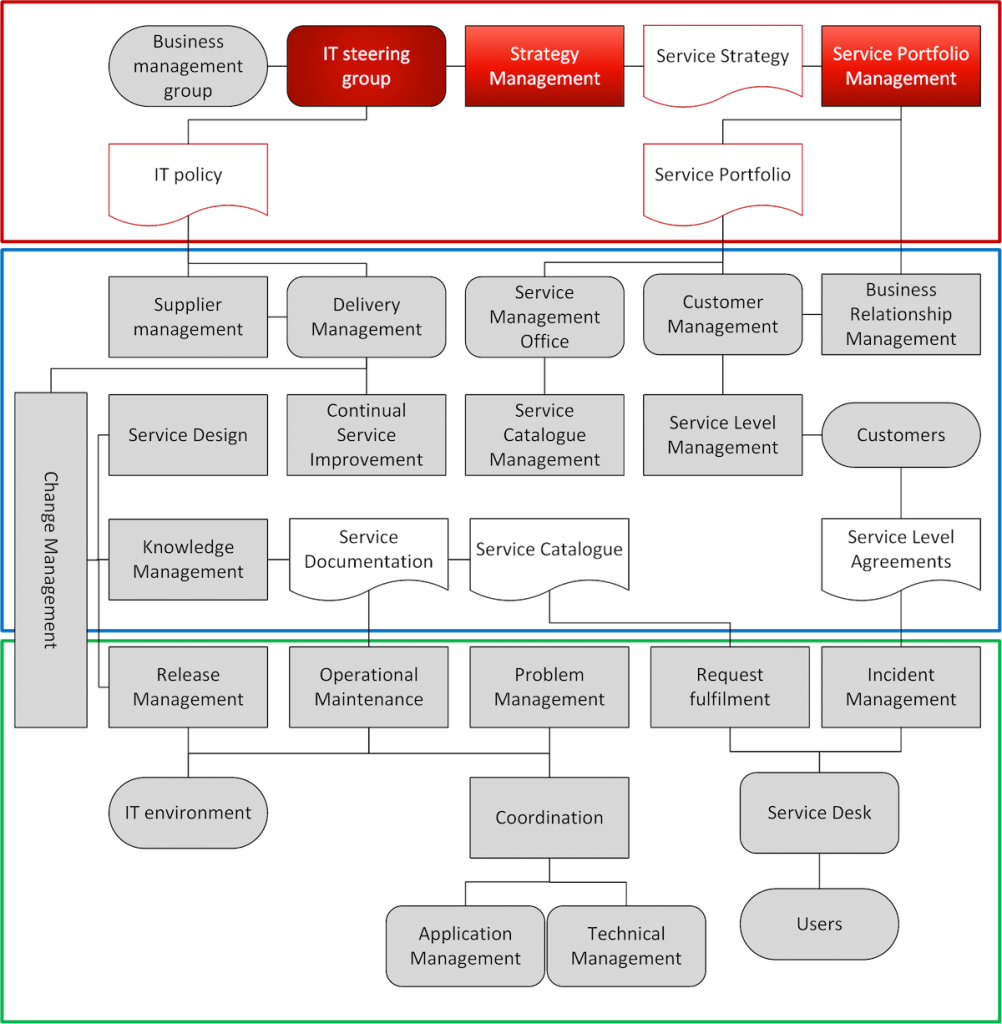